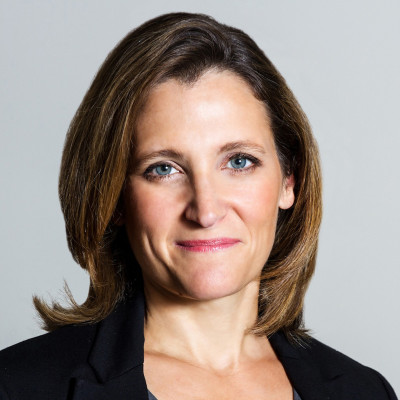 First elected to the House of Commons in a 2013 Toronto Centre by-election, Chrystia Freeland ran and won in the riding of University—Rosedale in the 2015, 2019, and 2021 federal elections.

Prior to the 2015 election, she served as co-chair of the Liberal Party’s economic advisory council. A Harvard graduate and Rhodes Scholar, she forged a career as a journalist with the Financial Times, the Washington Post, the Economist, the Globe and Mail, and Thomson Reuters. Her authored books include "Sale of a Century: The Inside Story of the Second Russian Revolution," and "Plutocrats: The Rise of the New Global Super-Rich and the Fall of Everyone Else."

Freeland speaks five languages: English, French, Ukrainian, Russian and Italian. She participated in a student exchange in Ukraine during the Communist era, acting as a fixer and translator for a New York Times reporter. Her grandparents fled Ukraine during the Second World War but imprinted a strong sense of Ukrainian identity on her.

Freeland and her husband, journalist Graham Bowley, both grew up on farms.

Committee Roles During the 41st Parliament

Staff information for this minister is currently being updated.

The real challenge today I think for our country is for our country to understand that we are facing such big issues in the world today that we really have to face them as Team Canada.